Surya Sharma has recently shifted his gears from TV to digital entertainment and has played an exceptionally amazing role of a very complex gray character of Rinku Paaji in the crime thriller Undekhi and has got a lot of love and accolades for this web show. He was last seen in Hostages 2 and reprised his role as Prince, and the outpour continues.

We got in touch with the actor recently and spoke about all things work and the second season of the show. Read excerpts here.

How and if there was pressure to keep up with the second season?

There was no such pressure, I feel blessed that my character is at least alive and that it will be returning to the show. Rest, I feel once you have cracked a character, it becomes easy to get back to it since you know the traits, and hence, I wasn’t hesitant at all. There is a scene that seemed to be rather humiliating since my entry scene shows me lying in the garbage dump yard for 30 minutes and these are things that stay with the actor, and that is the kind of life an actor leads, it is not all things glamour.

Tell us about how you geared up for your role in Hostages 2.

As I said earlier, it wasn’t very difficult to work on the character since a lot was already defined in season 1 itself and there couldn’t be any change. However, the transformation in the character that comes when he is shot and then comes back to life, he becomes a little soft-hearted and so he decides to help Prithvi out, even though he teases him a lot during the scenes, but that is the kind of attitude that Prince has. There wasn’t a lot of homework that I had to do, and I am looking forward to season 3 since there is hope for the audiences as far as my character is concerned as well.

How was it shooting with the likes of Ronit Roy and Divya Dutta?

I don’t have scenes with Divya Dutta, but I am really looking forward to working with her if ever we come across a script that has the both of us. I have heard a lot about her work. I have been working with Ronit sir since season 1 and he is a very humble guy, I enjoy working with him and we already have a defined chemistry on-screen while in the second season we both know what our character graphs are.

How is the response that you have received from your fans and applauders so far?

The response has been great so far and for my fans, this was a surprise. Ever since the trailer launched, fans were wondering and messaging how is my character alive and also asked for hints about what is coming through. When the show launched, I simply put up a photo and captioned it saying ‘Ek goli se marna wala nahi main’ and it was then that my fans watched the show as well and they relished watching it. Even Undekhi released recently, and the love from fans has only increased manifold with Hostages. It feels great to receive this kind of love from fans and it is true that no one can take that away from you.

Kareena Kapoor Khan mesmerises fans with a dreamy PHOTO; Says ‘Sometimes all you need is a little ray of hope’

Rushad Rana shares the story behind his separation

At a time when digitalization of the Indian economy is being sped up, Apple has opened its online store in keeping with the zeitgeist. On Wednesday, the world-famous technology giant made the move in style.

“We know how important it is for our customers to stay in touch with those they love and the world around them. We can’t wait to connect with our customers and expand support in India with the Apple Store online on September 23!” These are the words of Tim Cook, the CEO of Apple.

The new online store in the town seeks to offer Apple’s full range of products and support directly to customers across India for the first time. “The new online store will provide customers with the same premium experience found in Apple store locations around the world, delivered by online team members who are ready to offer their expertise,” a note from Apple’s blog says.

The company has said, “In October, customers can expect free online Today at Apple sessions led by local Creative Pros, focused on photography and music. Just in time for the festive season, signature gift wrap and personalized engraving will be available for select products.”

Yesterday there were reports making rounds that popular Tamil actor and politician Vijayakanth had tested positive for the deadly Coronavirus infection and had been admitted to a private hospital in Chennai.

Even as fans and followers of the famous star who’s the leader of Desiya Murpokku Dravida Kazhagam are praying for his speedy recovery, here’s an official update from the party on his health. 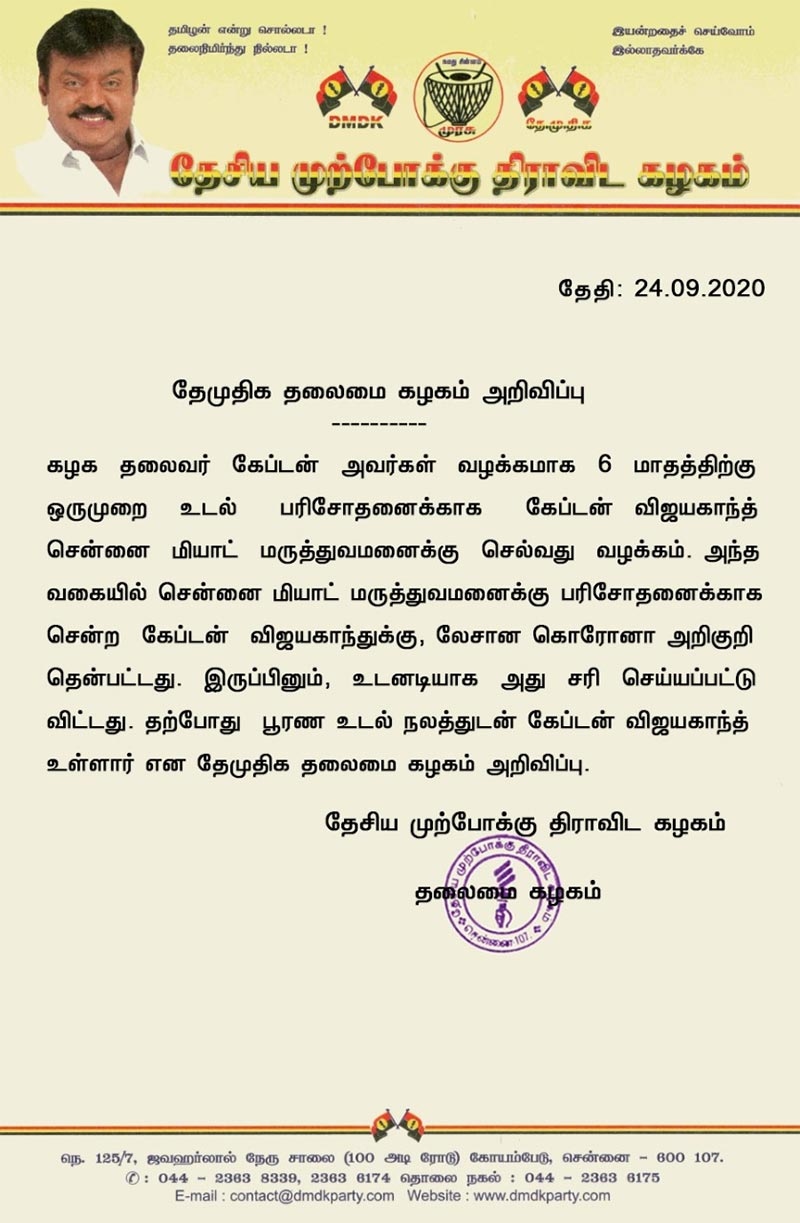 The official press release from DMDK states that the actor regularly visits hospital once in 6 months for medical checkup and during his latest medical checkup to MIOT hospital, Vijayakanth had exhibited mild corona symptoms following which he was treated completely and now the actor is doing well. This has clearly given an announcement that Vijayakanth is free from Coronavirus infection and comes across as a relief for his fans and well-wishers.

Shweta Tiwari, who plays the role of Guneet Sikka in Mere Dad Ki Dulhan, was not feeling well some time ago. Apparently, she got herself tested for COVID-19, but post this, there is no news from the actress. There’s a buzz that Shweta may have tested positive for Coronavirus and is currently under home quarantine.

A source was quoted by TOI as saying, “She (Shweta) was not feeling well some time ago after which she got herself tested for COVID-19. Thereafter there has been no news. There are rumours that she has tested positive, but she hasn’t issued any statement on this and neither has the production house. So, it’s not very clear.”

The shooting of the show is going on. TOI tried to contact the producers Tony and Deeya Singh, but they too haven’t responded yet about the same.

It has to be recalled that recently Varun Badola’s wife Rajeshwari Sachdev tested positive for COVID-19. After which, Varun stopped shooting for MDKD, was under home quarantine and got himself tested for the virus. The report turned negative. However, Varun said that he is getting himself tested for the second time and if it comes negative, he will resume shoot immediately.

Varun plays the role of Amber Sharma in MDKD, and currently, wedding track is going on for which both Shweta and Varun’s presence is required.